A timeline of events around industrial hemp in Portugal 2018/2019

How the mess unfolded

In 2018 our cooperative and a number of other farmers grew hemp in Portugal without problems by obtaining a simple authorisation from DGAV, indicating plot location, seed variety and planting date. DGAV approved those applications following an inspection of the seed bags.

On January 15th 2019 a new law was released (Decreto Lei 8/2019) which aimed primarily yo regulate the medical Cannabis industry in Portugal. In the last paragraph the law also mentions industrial uses of the plant Cannabis Sativa L. (which encompasses varieties in the EU catalogue of approved Hemp varieties). The law mentions an outstanding Portaria which would regulate industrial uses. Meanwhile INFARMED by law is in charge of industrial hemp authorisations.

We were ignored by DGAV and INFARMED when approaching them via Email throughout February and finally wrote a public letter to the government, which was published on March 7th.

Following the letter we finally managed to get a meeting with INFARMED in Lisbon on April 4th and were told that they refused to take responsibility. Industrial hemp in their eyes was the job of DGAV. At the same day we went back to DGAV, who in turn blocked any authorisations for growing hemp in Portugal in 2019, pointing to the missing legislation and delegated responsibility back to INFARMED. We launched a number of official complaints against DGAV.

Through our contacts at EIHA (European Industrial Hemp Association) we also send letters to some of Portugal’s MPs in Brussels who were informed that the state of things violates agreements between Portugal and the EU. The EU laws clearly stipulate free access to the hemp markets and even establishment of a subsidies scheme for hemp fibre. Information was also sent to the secretary of state for agriculture and a phone call following this exchange was made with his office. They acknowledged receipt of message and dismissed the hemp farmers issues in a very condescending way.

Regular contacts after that to DGAV always ended up with the same response: they were waiting for the Portaria and were unwilling to handle the authorisations.

We tried to stipulate a voluntary form that would allow us to grow under EU regulations with the support of seed inspections. We contacted a qualified technician in Figueira da Foz who initially was willing to confirm only the state of the seed bags (in terms of compliance) without issuing any form of authorisation. We included a phrase in the form that would expressly free the seed inspector of any responsibility. The inspector was initially willing to work with us, but in a subsequent call pulled back after receiving a call from DGAV in Lisbon, threatening him with consequences if he worked with us.

Results of a questionnaire to the hemp farming community

In early June Lusicanna made a census to evaluate the situation. The census had questions on the projected purpose of growing hemp, acreage and evaluation of government and it’s agencies in dealing with the current mess. The median area of grow was 2 Hectares per farmer. It also shows that among the hemp community, there is some confusion around where to draw the boundaries between medical Cannabis and Hemp, but that is clearly a minority. Here are the results: 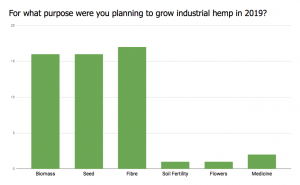 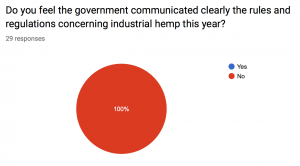 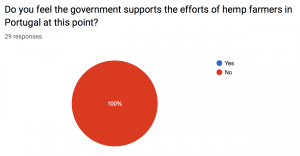 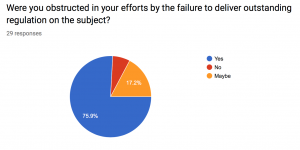 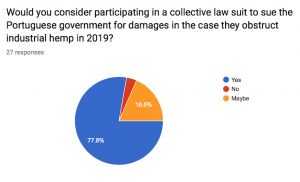 What is the damage caused by the blockade?

Until now, the following problems ensued as a result of blocking hemp authorisations for people who wanted to grow hemp in 2019:

If the hemp farmers decide to press the case in Brussels, Portugal would look at Millions of Euros in damages from lack of sales and loss of business opportunities and development. Resources with long experience in the legal field told us that the farmers have an excellent chance at succeeding. Whether the hemp businesses here in Portugal can catch up with the rapid market developments if given authorisation in 2020 remains an open question, as investor’s doubts mount for obvious reasons.

Of course the main looser of this nonsense is the Portuguese people. The idea of re-introducing hemp as a widespread crop is envisioned to help the country on many levels:

What are the reasons for the blockage of hemp in Portugal?

At this point the situation is open to interpretation. A benign view of events would be, that the Secretary of State of Agriculture, Luís Medeiros Vieira, was sick for two months during the spring, but seems to be back on his feet. Another contributing factor could be simple incompetence on behalf of the regulatory bodies involves (DGAV,  INFARMED and the Ministry of Agriculture). None of that would excuse their condescending behaviour towards the hemp farmers and their plight, but it would at least be understandable.

However, in our dealing with the agencies we discerned a certain amount of discomfort and even fear on their part. This suggests another theory. Since medical Cannabis companies have been heavily favoured by the Portuguese government, it is possible that they managed to influence the bureaucracy to blockage hemp. This is not such an unreasonable assumption when considering that Ângelo Correia, co-founder of the PSD and ex-Minister of internal affairs has 40% shares of TerraVerde (a medical Cannabis company from Israel) (Source dn.pt) or Jaime Gama, former president of the General Assembly is consultant to Tilray Portugal, a branch of a Canadian medical Cannabis company (Source: publico.pt). What would be the reason of connecting such ‘advocates’ with political connections to your business if not for those reasons? And given Portugal’s current state of affairs when it comes to corruption, the idea might not be too far fetched. The Portugal Corruption Report of GAN – an anti-corruption organisation) states:

“While the country has made significant progress in the past decade, recurring corruption scandals involving high-level politicians, local administrators, and businesses abusing public funds have revealed that safeguards to counter corruption, and abuses of power have been somewhat inefficient in Portugal.”  (Source ganintegrity.com)

But why should medical Cannabis industries have an interest in blocking industrial hemp? The explanation is simple. Conditions for the plant are good in Portugal, if not to say excellent. The medical Cannabis companies want to make as much money as possible by saving operation cost. The cheapest way to grow is in the field, outdoors. Why is that a problem with industrial hemp around? Because the industrial hemp could pollinate the medical crops, causing seeds to appear in their feminized crops, costing them money. Of course the problem could be solved by growing in greenhouses with appropriate filters. This way hemp and medical Cannabis could coexist peacefully. Obviously it would be cheaper to pull some strings in the back.

We leave the final conclusion to the estimated reader.

This website uses cookies to improve your experience while you navigate through the website. Out of these, the cookies that are categorized as necessary are stored on your browser as they are essential for the working of basic functionalities of the website. We also use third-party cookies that help us analyze and understand how you use this website. These cookies will be stored in your browser only with your consent. You also have the option to opt-out of these cookies. But opting out of some of these cookies may affect your browsing experience.
Necessary Always Enabled
Necessary cookies are absolutely essential for the website to function properly. This category only includes cookies that ensures basic functionalities and security features of the website. These cookies do not store any personal information.
Non-necessary
Any cookies that may not be particularly necessary for the website to function and is used specifically to collect user personal data via analytics, ads, other embedded contents are termed as non-necessary cookies. It is mandatory to procure user consent prior to running these cookies on your website.
SAVE & ACCEPT